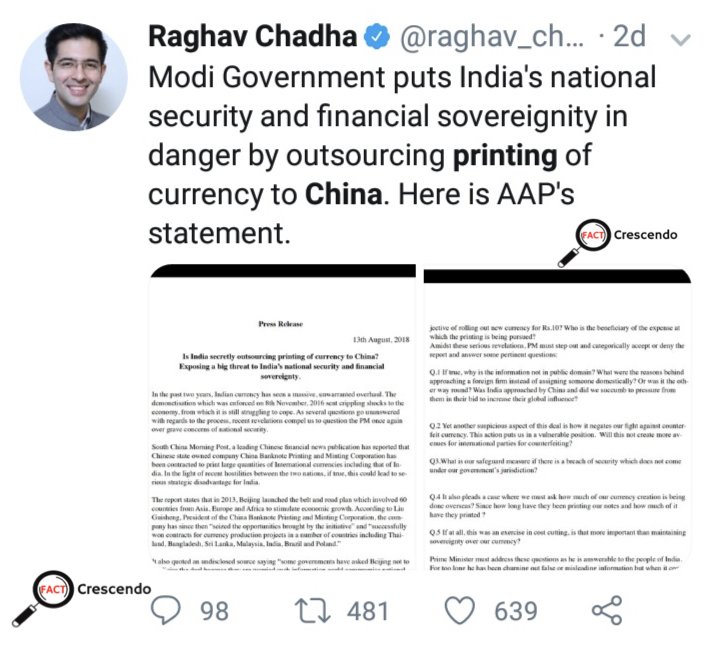 The news of Chinese printing facilities printing Indian currency notes was widespread on various social platforms, eminent politicians & media houses kept sharing the news & their views on why & how Indian Government have given the contract to China for the same. The News became a viral when Senior Congress Leader Shashi Tharoor shared a tweet by journalist Debashish R Chowdhury on 12/13th Aug 2018, in which Chowdhury had shared an article from the SCPM(South China Morning Post), Mr Chowdhary also holds an official designation with SCPM(South China Morning Post) as an editor.
The SCMP article professed that sources have asserted that China has won Currency printing contract from many countries including India, Malaysia, Thailand, Bangladesh, Poland. Chinese printing facilities are working at full capacity to deliver respective currencies.
However, on 13th Aug 2018 evening, an Official statement from the Indian government cleared the air on such reports of China printing Indian rupee, The secretary of the Department of Economic Affairs Mr.Subash Chandra Garg Stated:” Reports about any Chinese currency printing corporation getting any orders for printing Indian currency notes are totally baseless.” Moreover, Subash Chandra Garg added, “Indian currency notes are being and will be printed only in Indian government and RBI currency presses.”
Liu Guisheng, Chairman of China Banknote Printing and Minting Corporation, wrote in an article in May in China Finance, a bi-monthly journal run by China’s central bank, that China obtained the first international commercial order for printing money from Nepal in 2015. The state-owned firm won the bids of 100 rupees, 1,000 rupees and 5 rupees from Nepal, Liu said. Since then the company had “seized the opportunities brought by the initiative” and “successfully won contracts for currency production projects in a number of countries” including Thailand, Bangladesh, Sri Lanka, Malaysia, Brazil and Poland.
However, Mr Liu has not named India in the statement.

FACTCRESENDO verifies the shared article as fake & upholds the official statement issued by the Indian government:“Indian currency notes are being and will be printed only in Indian government and RBI currency presses.”