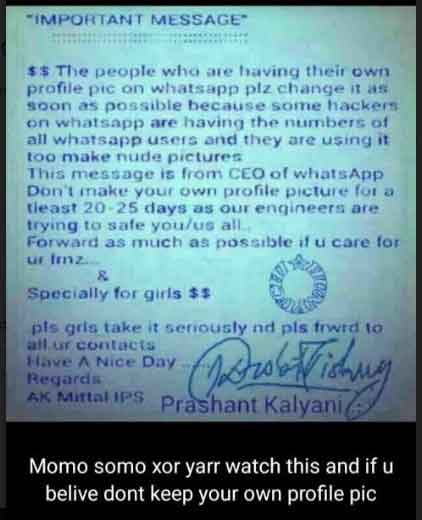 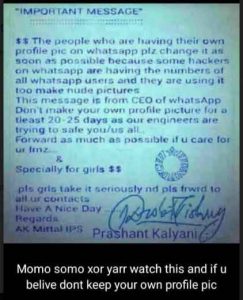 Recently, a hoax message asking people to change their profile picture on WhatsApp due to a possibility of hacking has been shared.
The message reads something like this:
“$$ The people who are having their own profile pic on whatsapp plz change it as soon as possible because some hackers on whatsapp are having the numbers of whatsapp users and they are using it too make nude pictures. This message is from CEO of whatsApp. Don’t make your own profile picture for atleast 20-25 days as our engineers are trying to safe you/us all…Forward as much as possible if u care for ur frnz…& Specially for girls $$. Pls girls take it seriously nd pls frwrd to all ur contacts. Have a Nice Day. Regards, A K Mittal IPS
<Signature of someone named “Prashant Kalyani” and a stamp>”
These messages are easily identified by millennials as fake but people of previous generations or those who are not so exposed to internet & social media mistake these kinds of messages as true and forward them to their contacts on WhatsApp. Please refer the image. 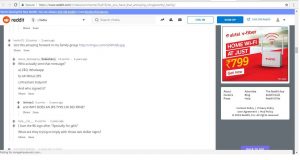 One of our readers Mr. Amrit Dev, asked us to look into this claim.
As per our investigation, wherein when we did Reverse Google search of the same image and also searched for mention of A.K.Mittal & WhatsApp message, we found out that this message is a hoax. And similar kinds of messages have been shared previously also.
On 5th July 2016: The Indian Express, reported a similar WhatsApp hoax message (but not exact same message) , wherein the message is signed off by an A.K. Mittal, who claims to be an IPS, has given out a mobile number (9849436632 ) and claims to be Commissioner Delhi. According to Truecaller, the number was listed as belonging to an Arshad Ali, and had been reported as spam.
You can read about it here.
Dear readers, these kind of messages are fake and please don’t share it further. In short, if you get this message, tell your friends in the group: It’s a hoax. 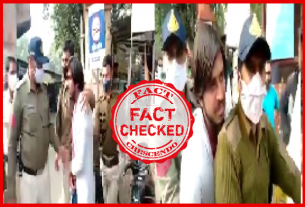 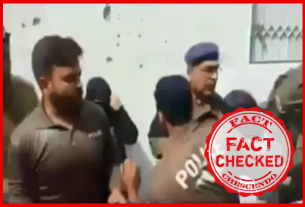 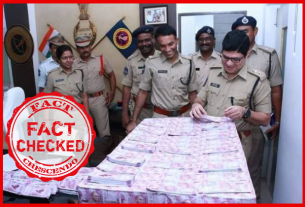